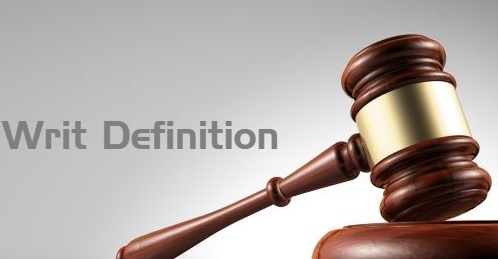 People gets frustrated to find out the actual definition of Writ. Interestingly there is no proper definition of Writ in the internet yet. Today you will get the complete elaboration on definition of Writ with examples and case laws. Writ is a nothing but a form of written command in the name of a court (mainly High Court and Supreme Court) or other legal authority to act or abstain from acting in some way. In simple legal words Writ means an order and it can be filed either in Supreme Court or High Court. In United States Of America it is known as Bill of Rights.

The Founding Fathers of the Constitution of India were aware of the part played by Prerogative writs in England. In these circumstances, they have made specific provisions in the Constitution itself empowering the Supreme Court and High Courts to issue writs in the nature of Habeas Corpus, Mandamus, Prohibition, Quo Warranto and Certiorari for enforcement of Fundamental Rights (Articles 32 and 226) and also for other purposes. Now you are thinking what is Prerogative Writ ? The expression Prerogative Writ is well known, precise and scientific definition of the said term is not possible. However, as the name indicates, it is a Writ specially associated with the King. In England, the high Prerogative Writs played a very important role in upholding the rights and liberties of subjects and in providing effective safeguards against arbitrary exercise of power by public authorities.

Right and Remedy are really the two sides of the same coin and they can not be dissociated from each other. Therefore, whenever an individual is aggrieved by any illegal action of an authority, certain remedies are available to him. The most important is issuance of Prerogative Writs. Ordinarily, a Writ would lie against the State and statutory bodies and persons charged with public duties. Though private persons immune from the Writ jurisdiction of the Supreme Court as well as of High Courts, issuance of a Writ to them would require exceptional circumstances.

It is well settled that under Article 226, the power of a High Court to issue an appropriate Writ is discretionary. One of the ground for refusing relief under Article 226 is that the petitioner has been guilty of delay and laches. It is imperative, if the petitioner wants to invoke the extraordinary remedy available under Article 226 of the Constitution, that he should come to the court at the earliest reasonably possible opportunity. Inordinate delay in making the motion for a Writ will be a good ground for refusing to exercise the discretion.

Where there is inordinate delay in filing a Writ petition, the Supreme Court under Article 32 or a High Court under Article 226 of the Constitution of India may refuse to exercise its discretionary powers. The fact that the third party’s rights were not created is hardly a ground for interference. This principle also applies to orders which are void.

In the case, State of Rajasthan vs. Laxmi (1996) 6 SCC 445 (453), the Supreme Court stated : “Though the order may be void, if the party does not approach the court within reasonable time, which is always a question of fact and have the order invalidated or acquiesced or waived, the discretion of the Court has to to be exercised in a reasonable manner. When the discretion has been conferred on the Court, the court may in appropriate case decline to grant the relief, even if it holds that the order was void.”

It should, however, be remembered that the existence of an alternative remedy is not an absolute bar to the granting of Writ under Article 226 of the Constitution. It is a rule of policy and practice and not a rule of law. It’s a question of discretion and not jurisdiction. Therefore, in exceptional cases a Writ can be issued notwithstanding the fact that an alternative remedy is available to the party and has not been availed of.

Thus, if there is a violation of a Fundamental Right, an aggrieved party has the right to move the Supreme Court under Article 32 or a High Court under Article 226. Similarly, if the remedy provided by the Statute can not be said to be alternative, adequate or equally efficacious or the Act by which such a remedy is provided is itself ultra vires or unconstitutional or the impugned order is without jurisdiction or violative of the principles of Natural Justice, the court can grant relief to the petitioner.

It is submitted that the following observation of Chief Justice Das, in the leading case of State of U.P vs. Mohd. Nooh AIR 1958 SC 86 : 1958 SCR 595, lay down the correct proposition of law, “The fact that the aggrieved party has another and adequate remedy may be taken into consideration by the superior court in arriving at a conclusion as to whether it should, in exercise of its discretion, issue a Writ Of Certiorari to quash the proceedings and decisions of inferior courts subordinate to it and ordinarily the superior court will decline to interfere until the aggrieved party has exhausted his other statutory remedies, if any. But this rule requiring the exhaustion of statutory remedies before the Writ will be granted in a rule of policy, convenience and discretion rather than a rule of law.”

It is well-settled that a party seeking relief under Article 32 or under Article 226 of the Constitution must must be truthful, frank and open. He should disclose all relevant facts without any reservation. He cannot pick and choose the facts be likes to disclose and keep back or conceal other facts. The very basis of the Writ jurisdiction rests on disclosure of correct facts. If material facts are suppressed, twisted or distorted, the very functioning of Writ courts would become impossible.

Under Definition of Writ there were 5 Writs in particular –

2) Writ Of Mandamus – It is an order issued by a court to a public authority asking it to perform a public duty imposed upon it by the Constitution or by any other law. Mandamus is a judicial remedy which is in the form of an order from a superior court to any Government, court, corporation or public authority to do or to forbear from doing some specific act which that body is obliged under law to do or refrain from doing, as the case may be, and which is in the nature of a public duty and in certain cases of a statutory duty.

5) Writ Of Quo Warranto – It is a judicial remedy against an occupier or usurper of an independent substantive public office, franchise or liberty. By issuing this Writ the person concerned is called upon to show to the court by what authority he holds the office, franchise or liberty. If the holder has no authority to hold the office he can be ousted from its enjoyment. On the other hand, this Writ also protects the holder of a public office from being deprived of that to which he may have a right.

The object of the Writ of Quo Warranto is to prevent a person who has wrongfully usurped a public office from continuing in that office. Quo Warranto is a discretionary remedy and the petitioner cannot claim this Writ as of right. The court may refuse to grant this Writ taking into account the facts and circumstances of the case. This may include instances where the issue of a Writ would be vexatious, or where there was acquiescence on the part of the petitioner, or where it would be futile as the holder of an office has ceased to hold the office in question.

As already discussed, an aggrieved party has a right to approach the Supreme Court under Article 32 or a High Court under Article 226 of the Constitution for an appropriate Writ, direction or order. They are extraordinary or prerogative remedies. For further new information on definition of Writ will be updated below.