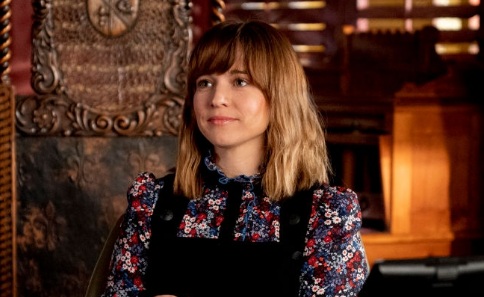 The character Nell Jones is missing from the NCIS Los Angeles series this season but fans are still searching for her latest activities. She always shares her latest happening on social media channels now she came up with one important message.

We all know how fans get upset after her exit from the NCIS Los Angeles series. Fans are very much loving the character Nell Jones where she provided crucial information from each case that brings criminals down. Right now actress she is busy with her new assignment. Her upcoming short movie SOMEONE TO CARRY YOU is set for release later this year.

But recently she came up with a story on a portrait from Olivia Herrick’s design. Where it’s written “Good things take time. So please don’t give up.” This post means a lot to fans as they have shown their desire to see her character Nell Jones back in the NCIS Los Angeles series. Meanwhile, producers already said Nell’s character was given break since she is busy with her new project. She can come back anytime in the future.

Actress Renee Felice Smith is right now on a tour of vacation. But she didn’t forget her book HUGO and the IMPOSSIBLE THING. It completes 1 year. She celebrated this little moment along with fans on social media. She posted, “TODAY HUGO AND THE IMPOSSIBLE THING turns ONE ! Happy first book birthday to the boy who inspired it all, our fur child, Hugo. The first video was taken when Hugo had started acting like himself again after treatment. For anyone who has ever taken care of anyone who was gravely ill, you know the singular joy it brings to see them come back into their body. Nothing compares. Second video, Hugo’s first steps after his brain surgery at UC DAVIS. The incredible medial team, led by absolute rockstar head surgeon, Dr. Bev Sturges, performed a miracle. A GD MIRACLE. Third video, taken three months after Hugo had fully healed after surgery. My wild boy was back. The medical books said this should not have happened. Hugo had other ideas. We were fortunate enough to witness HUGO conquer the impossible. And we knew we had to share his inspiring tale with all of you. So…be like Hugo ! Be curious enough to ask the questions and courageous enough to try !”

Actress Renee Felice Smith came up with her latest sunshine picture. She is on vacation and enjoying her life. Fans are waiting to see her back in the NCIS Los Angeles series. By posting a new picture, she gave a message to the fans as “Sunny days ahead”.