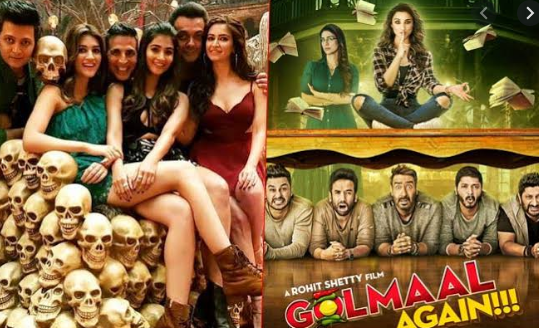 In social media, like Twitter and Facebook there is a big debate going on regarding the biggest comedy brand. No doubt if we go with comedy franchise then Indian movies have the best of line ups. The best series comes to our mind is Hera Pheri which is bigger than all. It may not be a big Box Office Hit but it’s a MASSIVE HIT at Satellite or digital world. Earlier days there was the business of CD (after that computer and internet diminish their business), Hera Pheri was the most sold CD’s ever in All over India. Even the sequel of Hera Pheri came which put up thrice the figure of it’s earlier part at Box Office.

There were many comedy brands which were most successful at Box Office few of them were Welcome, Masti, Dhamaal, Fukrey etc etc. But, the bigger two brands are Golmaal and Housefull which ran on continue it’s fourth installment. The debate came here only as which is the bigger comedy brand Housefull or Golmaal? Coming back to first Golmaal, this holds the record of the biggest comedy brand in the Indian Box Office. What more interesting is whenever the sequel of one part releases the next part always doubled up the collection. Golmaal started the journey in 2006 with 29 Crores and Golmaal Returns in 2008 zoom past 50 Crores mark. The trend continues in 2010 when Golmaal 3 doubles up with 100 Crores plus. History repeated in 2017 yet again as Golmaal Again doubles up from its previous part and achieved the 200 Crores mark feat (First ever for any Bollywood comedy movie).

In contrast, the Housefull series has a lot of ups and downs. The first part has done a fantastic 70 Crores mark with the second one (the best one probably) hits the 110 Crores mark but the third installment fails to grow much. Rather it falls from its previous part by 4-5 crores. In terms of Hit ratio also third part was lesser Hit as compared to the first one. But, now the fourth part again challenging the second part and chasing for the biggest hit of this franchise. This time there was tremendous media negativity for this movie but still, the movie came on its own from nowhere. The way it’s trending right now it also challenging for all time Comedy grosser ever in India though Tickets Sold might fall less. This put up the debate high as which is a bigger comedy brand Housefull or Golmaal series.

Besides this all, there were many comedy hits at Box Office for which no sequel is made two of them are Salman Khan’s Biwi No.1 and Ready. Both were the 2nd and 3rd biggest comedy Hit ever after Golmaal Again at Indian Box Office. Apart from these two, we feel one more Salman Khan movie whose sequel could have smashed every record in the comedy department and that was No Entry. This was the Biggest Hit of 2007. In terms of collection, it may look small. But, it got the biggest TRP in the Satellite world after it’s release. Even today also this movie has very much repeat value one can expect surprise numbers from this sequel if ever release with the same team again.