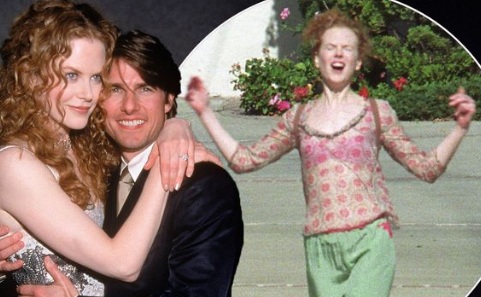 Nicole Kidman was just 22 when she met Tom Cruise. When she auditioned for Days of Thunder at the end of 1989, Tom Cruise’s marriage to older actress Mimi Rogers was already ending and he’d been impressed by Nicole Kidman’s performance in her previous movie Dead Calm. One sighting of Tom Cruise’s killer smile was all it took for Nicole Kidman to fall and who can blame her. She’s often spoken of how she fell madly passionately in love. She said, “I remember being so nervous and seeing tom cruise drive up in a Porsche”. She told Vanity Fair speaking of their first meeting, “he got out of the car and walked through the door and I was like oh my jaw dropped”. The actress regularly mentioned the electricity she felt with the actor and the way he swept her off her feet before Tom Cruise.

Nicole Kidman had dated men who shared her background. She was linked to former Aussie teenage Heartthrob Marcus Graham and Canadian Australian actor and singer Tom Burlinson who she acted within Windrider but with Tom Cruise, she knew she’d found the one the actress who’d reportedly sworn off marriage wed crews. Just a year after they met as happens when you fall in love my whole plan in terms of what I wanted for my life I was like forget it. This is it. I was consumed by it willingly she admitted. Together they became the biggest celebrity power couple of the 90s. Pregnancy devastation yet behind closed doors.

What really happened with Tom Cruise and Nicole Kidman after marriage ?

Things weren’t always easy soon after she and Tom Cruise got married. Nicole Kidman had an ectopic pregnancy and lost her unborn child devastated. The two eventually moved on and ultimately adopted two children. A newborn baby girl they named Isabella and three years later a four-month-old baby boy called Connor. “From the minute Tom and I were married, I wanted to have babies” she later told Murray Clare, and “we lost a baby early on so that was really very traumatic and that’s when it came that we would adopt Bella. My mother had an adopted sister. So it’s been part of our family and I knew it would probably play out somewhere in mine. I didn’t think it would happen so early but it did in 2001.”

Shortly before the stars famously divorced Nicole Kidman suffered a miscarriage. Nicole Kidman later called both pregnancy losses incredibly traumatic. “I know the yearning”. She said that yearning, it’s a huge aching yearning and the loss. The loss of a miscarriage is not talked about enough. That’s massive grief to certain women eyes wide shut after over a decade of love loss healing and joy. Nicole Kidman and crews shocked fans by separating in 2001.

Tom Cruise & Nicole Kidman movie together – The two had recently filmed Stanley Kubrick’s intense erotic psychological drama Eyes Wide Shut which many claimed took a toll on their marriage. Yet Nicole Kidman recently denied this in an interview with the New York Times saying they were happily married throughout the filming process. The way Kubrick made his stars immerse themselves in a fictional troubled marriage, goodman denied that any part of that was weird this is where the fallacy is “we loved working with him, we shot that for two years, we had two kids and were living in a trailer. On the lot primarily we were working with the greatest filmmaker and learning about our lives and enjoying our lives on set. She and Cruz would apparently rent out a track and go go-kart racing at 3 am after filming difficult scenes”.

While Nicole Kidman has spoken about her marriage to Tom Cruise. There are things she won’t reveal. “I want to honor that marriage for what it was and there’s nothing I would go into about that. She once said I’ve never discussed the intricacies of it and I never will a waitress in a restaurant that i’d gone into. She came up just quietly. Actually, when she was bringing the check and she just said to me it’s so good because you look happy and I’ve seen you through you know the last few years and you haven’t looked happy.”

So what really caused their split ? What really happened with Tom Cruise and Nicole Kidman ? Nicole Kidman was reportedly blindsided when Tom Cruise filed for divorce citing irreconcilable differences. Aside from the rumors surrounding Eyes Wide Shut, many also claimed that Tom Cruise’s love of Scientology also tore them apart. Nicole Kidman’s late father was a psychologist which is something the church of Scientology is strictly against the judge of Scientology. Reportedly wanted to break up the couple because Nicole Kidman wasn’t a believer and they wanted Tom Cruise to further their mission but there was more to the end of their marriage. Nicole Kidman suggested she claimed that they were living in a bubble and issues like fame youth and growing responsibilities all led to their divorce. “Our life together was perfect. It took me a very long time to heal”, she said. “it was a shock to my system. That was a great relationship. I think it ran its course. I was really damaged and not sure whether love and marriage were ever going to happen again to me”.

Nicole Kidman’s relationship with her now grown-up kids with Tom Cruise has been the subject of much scrutiny. The two are both Scientologists which has apparently caused a rift with their mother. They were reportedly estranged from Nicole Kidman for many years after the church declared her a suppressive person. Yet the actress is very protective of her kids with Tom Cruise even though she doesn’t echo their beliefs, they are adults she said. “They’re able to make their own decisions, they’ve made choices to be Scientologists and as a mother, it’s my job to love them. So that’s our job as a parent to always offer unconditional love”. In recent years Conor and Isabella have reportedly grown closer to Nicole Kidman.

As for her and Tom Cruise they also still have a lot of love for each other. In a 2005 interview, Tom Cruise said he loved Nicole Kidman very much and just wished her happiness. A year later Nicole Kidman reciprocated, “he was huge still is she told ladies home journal to me he was just tom but to everybody else he’s huge but he was lovely to me and I loved him. I still love him.” There’s a part of her that probably always will but we’re thrilled that Nicole Kidman has found lasting happiness with Urban. What do you think really happened with Nicole Kidman and Tom Cruise’s divorce ? We will come up with new facts on this topic on another day meanwhile you check who is Tom Cruise married to right now.