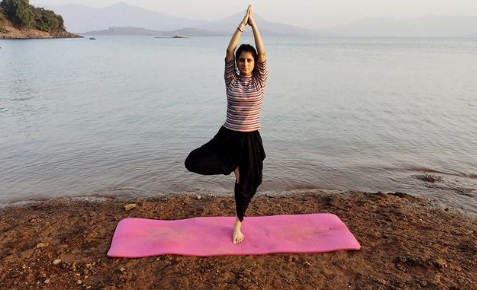 Nature has been the source of inspiration for all the Yoga poses created by the great yogis and sages of India in the science of Yoga. He considered nature as the basis of the creation, maintenance, and destruction of human beings. Perhaps this is the reason that every posture of Yoga science is based on the posture made from any part, animal, bird, object, or part of nature. This is what helps the science of Yoga to make it a science of nature. One such pose of Yoga science is Vrikshasana. Vrikshasana is also called Tree Pose. Vrikshasana is a Yoga posture that helps in bringing stability, balance, and stamina to your body. Therefore, in this article, we will give you information about what is Vrikshasana, the benefits of Vrikshasana Yoga, the right way to do it, the method, and precautions.

Vrikshasana is a Sanskrit word. It means tree, that is, a tree-like seat. In this Yoga, the body of the yogi forms the position of a tree and tries to absorb the same seriousness and vastness in himself.

Regular practice of Vrikshasana helps your body gain new consciousness and energy. Generally, while doing Yoga, you are advised to close your eyes and feel the energy.

But during Vrikshasana you are asked to keep your eyes open. This is so that you can gain the motivation to balance the body as well as keep yourself steady while watching the activities around you.

Vrikshasana is the beginner-level posture of Hatha Yoga. While doing this Yoga, it is advised to stand on one leg for only one minute. After this, it should be done on the other leg. This Yoga should be done at least 5 times on each leg.

With regular practice of Vrikshasana, ankles, thighs, calves, ribs become strong. While there is a strain on the groin, thighs, shoulders, and chest.

How To Do Vrikshasana Step By Step ?

In the beginning, you may find it difficult to do Vrikshasana. Because you have to keep your left foot above the right knee. In such a position, you can keep your foot below the knee.

But, never put the foot on your knee. Apart from this, it may also feel difficult for you to stand still and maintain balance. Therefore, if there is any discomfort in practicing this Yoga in the initial phase, you can take the support of the wall to make balance.

Apart from this, to increase concentration, you can take a few long breaths before the practice of Vrikshasana and keep yourself balanced and stable by keeping your gaze on an object in front of you.

1. Stand up straight on the yoga mat in a careful posture.

2. Bring both hands near the thighs.

3. Slowly bend the right knee and place it on the left thigh.

4. Keep the left foot firmly on the ground during this.

5. Keep the left leg straight and normalize the speed of breathing.

7. Make a posture of ‘Namaskar’ by taking both hands up.

8. Keep an eye on a distant object and maintain balance.

9. Keep the spine straight. The body will remain strong as well as flexible.

11. Release the body while exhaling.

12. Slowly bring the hands down.

13. Now put the right leg on the ground as well.

14. Stand as you stood before the posture.

15. Now repeat the same process with the left leg as well.

What Are The Benefits of Vrikshasana Yoga ?

Vrikshasana is a posture to balance the body. The main benefits of Vrikshasana Yoga are hidden in creating balance and enhancing the nervous system.

When you balance the body, you force the mind to focus and when you focus, you start feeling that you can balance. When the mind becomes aware of this fact, it starts sending similar signals to the body. Because of this, you learn the art of creating balance at a slow pace, even in situations of stress and tension.

Apart from this, during Vrikshasana, you are also stabilizing your mind and body through stretching. This Yoga strengthens your joints and bones. Apart from this, it also helps to stretch the part of the hips and chest. This frees up the movement of your shoulders and also helps tone the hands.

Apart from this, there are many benefits of practicing Vrikshasana. Like,

2. It helps in creating stability and balance in the body.

3. It makes the connection between neuro-muscular strong and healthy.

4. Vrikshasana tones the muscles of the feet.

5. It strengthens the ligaments and tendons of the feet.

6. The knees are strong and the hip joints are loose.

7. The eyes, inner ear, and shoulders are also strengthened.

8. It helps in relieving the pain of the sciatica.

9. It also gives relief from the problem of flat feet.

10. It makes you stable, flexible, and patient.

12. This Yoga also helps in increasing the width of the chest.

Now you are aware of Vrikshasana Yoga benefits but there are some precautions. Vrikshasana should be practiced only in the morning. But if you are doing this Yoga in the evening, then you must take your meal at least 4 to 6 hours before. It is also important to make sure that before doing the Yoga, you have defecated and the stomach is empty.

While practicing Vrikshasana, you should keep in mind that the sole of the raised leg should be either above or below the knee of the standing leg. Try to stay on top. Many times people make the mistake that while practicing Yoga, they keep their feet on their knees. This puts unnecessary stress on the knee and increases the chances of imbalance.

Also, avoid practicing Vrikshasana if you have the following problems.

1. Patients with high blood pressure should not raise their hands upwards while doing Vrikshasana. They can also place their hands on the chest or in ‘Anjali Mudra’.

2. Insomnia patients should not practice Vrikshasana.

3. Vrikshasana should not be done even if there is a problem of migraine.

4. In the beginning, do Vrikshasana only under the supervision of a Yoga trainer.

5. You can also do this Yoga on your own when the balance is achieved.

Take the help of this video below to do Vrikshasana Yoga.

You can also check here 6 amazing benefits of Katichakrasana Yoga.