Prabhas is an exceptional actor in the film industry who gave 5 years of his life for the film ‘Baahubali’. That is, by the time the shooting of this film went on, he had not signed any other film. This is so that there is no obstruction in the middle of the preparation of this film or else their attention is not diverted. So let us tell you some things related to Prabhas’s life that you might not know. (untold story on Prabhas’s life). Prabhas, popularly known as ‘Baahubali’, is Uppalapati Venkata Satyanarayana Prabhas Raju. Prabhas started his film career 18 years ago with the film ‘Eeswar’ in 2002. In these 18 years, Prabhas achieved such a place where it is not a matter of everyone to reach. However, Prabhas did not get much recognition through his first film.

This was followed by his next film “Raghavendra” in 2003 and ‘Varsham’ in 2004. In Varsham, Prabhas presented himself as a hero in front of the fans. In 2005, Prabhas appeared in S.S.Rajamouli’s film Chatrapathi. In this film, Prabhas played the role of Refugee. The film was well-received by the audience and ran for 100 days in about 54 centers. Prabhas dominated the film at the box office. It was followed by the release of films one after another including Pournami, Yogi, Munna, Billa, Ek Niranjan and others.

It was not difficult for Prabhas to step into films. Prabhas belongs to the film family. Prabhas’s father is a producer whose name is Uppalapati Surya Narayana Raju, while his uncle has been a Tollywood star. His name is Krishnam Raju Uppalapati. Despite being associated with the film background, Prabhas never wanted to become an actor. He wanted to make his career in the hotel industry, which is why Prabhas is very fond of cooking. During the interview, Prabhas himself has said this that he was destined to become an actor, perhaps because he came into the film line. Hope you liked this untold story on Prabhas’s life. 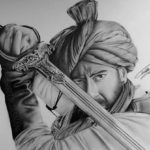 Tanhaji Sequel Is On Card
error: Content is protected !!