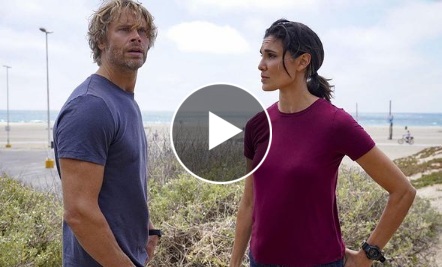 It’s a pretty well last week for fans as their heart-warming action-packed NCIS Los Angeles series Season 13 began smoothly. After the early end (four to six episodes earlier) of Season 12 due to the Covid 19 situation, it’s a big joyful moment for fans. The back of Gerald McRaney in the NCIS Los Angeles team also created joy among targeted fans. Today we bring you 5 unseen pictures and moments of the NCIS Los Angeles Series from Season 13 Episode 2, Fukushu that will entertain you more.

We can’t think NCIS Los Angeles series without Marty Deeks. There was confusion regarding mid of Season 12 as well as at the beginning of his exit. But, he proves everyone wrong with the below scene in Fukushu (Season 13 Episode 2). By the way, Deeks and Kensi’s relationship will also play a part in this season too.

Also, makers have made it clear that Season 13 of the NCIS Los Angeles series will be full of action. Daniela Ruah (Kensi) has already been appointed action trainer. Let’s check below some action training moments of this episode along with the promo.