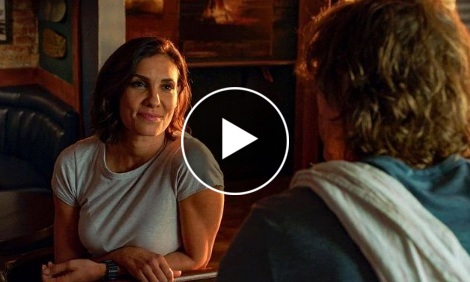 ANGRY KAREN is the name of 3rd episode from Season 12 of the NCIS Los Angeles series.

Plot : When Nell Jones sends Sam Hanna to meet an informant who plans to blow the whistle on a military secret, Sam Hanna’s life is in danger when the man tries to run him down and kill him. Also, Kensi and Deeks debate whether or not to buy their first house.

There were some typical scenes that fans may have missed in this particular episode. Let’s check one by one those moments.

You have seen many accidental vehicle scenes in Hollywood movies but this below scene of Callen inside car matches the same level.

In the last episode, Sam Hanna was seen in an action mode. Now we have brought you one light moment of him with Emma Jones (played by actress Ashley Fink). You can also check 4 unsaid reality of Sam Hanna from the NCIS Los Angeles series.

We all know Fatima is playing an important part in Season 12 due to the absence of Hetty. Watch out for this rare moment of Fatima and Callen together below.

Fans will become a bore if NCIS Los Angeles episode is held without their favourite couple Densi. How can we miss that too? Pick of the all unrevealed moments of NCIS Los Angeles series from Season 12 Episode 3 is this particular laughable Densi humor.

Hope you enjoyed these unrevealed moments of the NCIS Los Angeles series from Season 12 Episode 3.