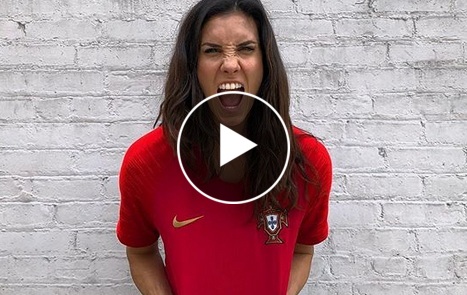 NCIS Los Angeles series may have been under break after the completion of Season 12 but lead actress Daniela Ruah hardly thinking of any rest. Last week you saw her passion for her new direction. She completed her new telefilm in no time. The energy continues. This time in the field of soccer. We all know Euro 2020 (the second biggest soccer event after World Cup) going on and it came as to surprise for us to see the excitement of Daniela Ruah.

Daniela Ruah is so popular in her country Portugal that a big banner was set by their nation where the most popular faces were shown. It includes Cristiano Ronaldo. It’s a proud feeling for Daniela Ruah and her fans that she has been staged along with a big soccer star in the same frame.

It’s not the first time. Earlier we saw Daniela Ruah as host last year in the Super Bowl Greatest Commercials. NCIS Los Angeles lead actress loves sports and it can be seen with her excitement. Meanwhile, you catch that commercial’s inside look below where she is looking gorgeous.