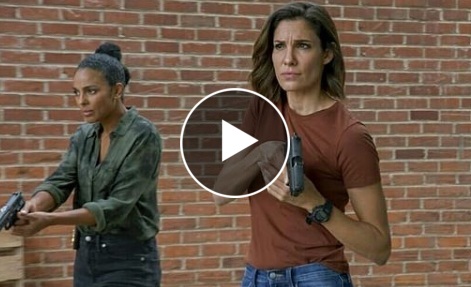 NCIS Los Angeles Season 12 Episode 4 (Plot) : The body of a murdered Navy reservist is found by thieves in a robbery and NCIS must work with the burglars to find the killer. Also, Kensi and Deeks struggle to decide if they are ready to make the leap and buy a house, at a special time. There were few catchy scenes that fans may have missed in this particular episode. Let’s check those catchy scenes.

Season 12 of NCIS Los Angeles began with Sam & Callen. You had witnessed some terrific action sequences of these two earlier. This episode doubles the excitement. The below scene speaks it all.

Daniela Ruah is always known for her style. In this episode, we have seen a new hairstyle from Kensi. It can be glimpsed prominently in a scene with Nicole Dechamps played by actress Marsha Thomason.

Callen is simply outstanding from the beginning of Season 12. Look likes the whole season belongs to him. In the last episode, we checked one marvelous car accident scene. Today you will be thrilled more with this action style of Callen.

Fans are thinking for some time if Callen is the heart of this season then where is his love interest. Well, wait is over. Check Anna Kolcheck’s 1st clipping from Season 12 of the NCIS Los Angeles series. You can also check here why Anna Kolcheck is important for Season 12.