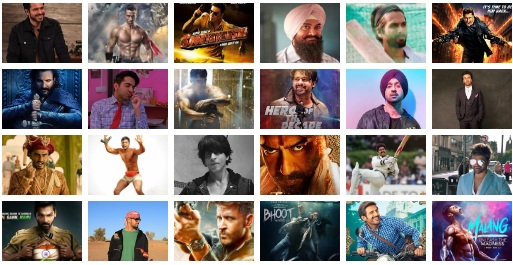 The year 2020 started on a strong note. There was one big potential movie which already released and went on to become a BLOCKBUSTER. Ajay Devgn’s Tanhaji – The Unsung Warrior which is set for a long run at Box Office. But, Deepika Padukone’s much-awaited Chhapaak crashed at Box Office. The result is the same for Bhangra Paa Le and few other small movies released on January. Ajay Devgn can improve it’s position from last month’s most popular actor in Bollywood for 2020 ranking.

In our last month’s popularity ranking South Superstar Prabhas Raju and Salman Khan ruled the chart for Top two spots. After the BLOCKBUSTER response of Tanhaji – The Unsung Warrior there is an obvious chance that the impact in our poll will be there from Ajay Devgn.

Tiger Shroff should improve it’s ranking with Baaghi 3. Both Aditya Roy Kapoor, Ayushmann Khurrana, Vicky Kaushal and Kartik Aaryan will try to improve its ranking too. In last month’s poll, Akshay Kumar drops to 6th which was a big surprise. It will be interesting to see can he again enters the Top 5 list. Most Popular Actor In Bollywood For January 2020 do follow this link – https://grababyte.in/most-popular-actor-in-bollywood-for-january-2020/.

Who Is The Most Popular Actor In Bollywood (February 2020) ?