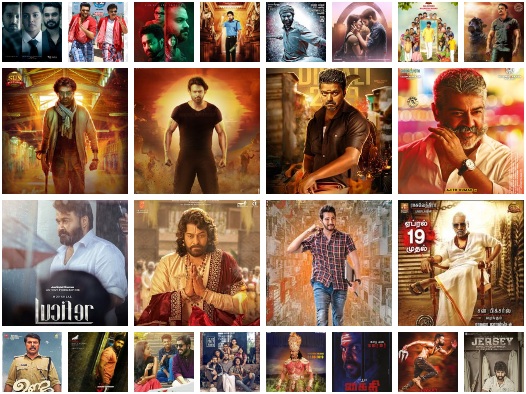 The year 2019 had been very good in terms of South Indian movies. As many as seven movies go past 100 Crores net mark in the domestic market itself. All the top seven were from either the Tamil or Telugu industry. The list starts with Prabhas’s Saaho which is the highest grosser in terms of all languages net in South India this year. Saaho is one of the most loved South Indian movies of 2019. Saaho also remains the only South Indian movie to cross 400 Crores Worldwide mark in 2019. Overall, Saaho is still 2nd in the list of Indian Movies (All languages) net collection as well as Worldwide Gross, just behind Tiger Shroff and Hrithik Roshan’s Bollywood Super Hit War.

Vijay’s Diwali release Bigil is the Highest Tamil net grosser of 2019. Bigil is also one of the most loved South Indian movies of 2019 from the Tamil industry. Bigil is the only Tamil movie to cross 300 Crores Worldwide mark this year. In terms of domestic net also it’s highest in the Tamil film industry for the year 2019. The movie is a SUPER HIT at Box Office. Bigil also did very good business at the domestic market with a collection of over 180 Crores net.

Sye Raa Narasimha Reddy is the third-highest Worldwide grosser from the South market this year. This Chiranjeevi movie has done very good business at Telugu version but the Hindi version was completely washout. Still, it put up close to 250 Crores Worldwide Gross and managed to remain ahead of Rajinikanth’s Petta which also put up 225 Crores gross earlier in the month of January. Petta scores over 131 Crores net in the domestic market.

Mahesh Babu’s Maharshi and Ajith Kumar’s Viswasam both gone past 100 Crores net mark in India. Both had similar Worldwide figures of around 185 Crores gross. Apart from the above six movies, there is one more movie which surprisingly zooms past 100 Crores net in India was F2 : Fun and Frustration. This Tamannaah Bhatia Telugu comedy movie went on to score around 105 Crores net in the domestic circuit. Whereas it’s Worldwide figure is approx 141 Crores gross. Apart from above mentioned seven movies there were a lot more Hits and Super Hits this year in South India. Mohanlal’s Lucifer is the Highest Net Grosser from the Malayalam industry. Similarly, Kurukshetra Tops the list from the Kannada market.

Which Is The Most Loved South Indian Movie Of 2019 ?