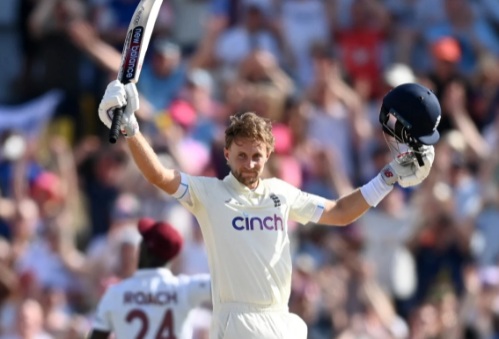 England captain Joe Root completes 10000 runs in Test cricket during his side’s first innings against West Indies at Bridgetown on Thursday. Batting in after winning the toss, Root came in again with England in trouble at 4/1 on day one. Root then took on the mantle of leading England’s recovery before reaching his 25th Test ton in the third session on day one.

Root became the 14th batsman to cross this milestone. Root is just the second England batsman behind Alastair Cook to reach the mark.

Root reached the feat in his 213th Test innings making him quicker than Cook who got there in 229 innings. West Indies’s Brian Lara, India’s Sachin Tendulkar & Sri Lanka’s Kumar Sangakkara remains the fastest batter to 10000 jointly, reaching the mark in just 195 innings.

The 31-year-old has been in prolific form in 2021, leading the run charts in World by a distance with 1708 runs comprising six hundreds at 61.00 Batting Average.

Root’s second hundred of the series (fifth overall in 22 innings), helped him better his stunning record against West Indies in red-ball cricket. Root also went past the 1100 run mark against West Indies in Tests during the innings. He has now the best batting average in Test Cricket among all countries with over 62 versus West Indies. His previous best was against India with 60.33.