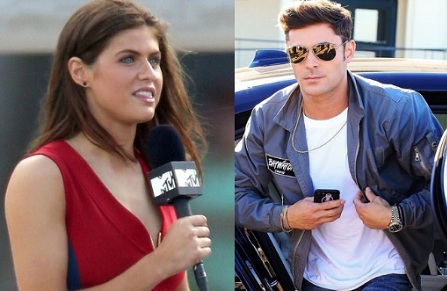 In 2017 people have been speculating that the two are secretly dating. Alexandra Daddario tried to shut the rumor down early on when she addressed it at the Billboard Music Awards.

According to Alexandra Daddario, “We worked together closely. He’s my love interest in the film. I understand why people would go crazy over something like that but Zac and I are very good friends”.

One year later it looks like she’s sticking to that story. She told people at an event last Thursday he is one of her four very close good friends. She said, “Zac and I have worked together and were very good friends.”

If they are just friends she probably has Zac Efron on his Instagram account to thank for the dating rumors because back in March 2018 he posted a picture of himself hugging Alexandra Daddario with the caption quote “Happy birthday to one of the most real, down to ????, stunning, intelligent, creative, loving, and most rare Pokémon ever created”, sounds like a pretty heartfelt message if you ask us.

Just two weeks later the pair was spotted out in Los Angeles at a pet store with their dogs in tow. Zac Efron must have taken a liking to Alexandra Daddario’s furry friend because when she posted a photo of herself and her pup on Instagram the next week he commented quote to a hot night.

Zac Efron then in totally coincidental move, posted a photo of himself with his own dog. A few hours later when Alexandra Daddario commented, quote “Angel Dog” on the photo he replied with the quote “doggie date” sounds like the dogs.