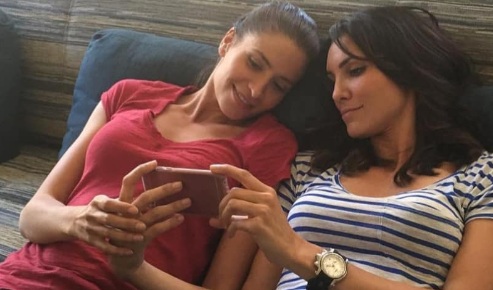 We all know how important is Kensi Blye in the NCIS Los Angeles Series. She is the most important female character along with Hetty in the whole series. The character Kensi played by Daniela Ruah is NCIS special agent in this series. From action to romance to dance to humor she is ultimately the best all-round female character of NCIS Los Angeles Series. The absence of her in any episode creates void. Despite, all this aggression there is one more lady who almost challenged Kensi in every aspect. She is none other than Talia Del Campo (Mercedes Mason). Talia is an agent with the drug enforcement agency. Just like Kensi, she was terrific in action and perfectly matched in humor too. The situation got spicier when she irritates Kensi by flirting Deeks. The jealousy of Kensi clearly shown. During Season 6, 1st Episode (Idiots) both witnesses a nasty punches on each other regarding this issue. But, whatever anger both had in the story itself or in real life too. Some pictures will give you the answer. Today, we will see 6 unseen pictures behind the sets of NCIS Los Angeles between Kensi & Talia together. These pictures were very rare and not revealed earlier in any media channel.

Talia and Kensi both worked together in the series for a few seasons but regarding Deeks’s issue somehow small mind-game clash held between them. These 6 unseen pictures behind the sets of NCIS Los Angeles of Kensi & Talia together will clear out their attitude towards each other in real life.