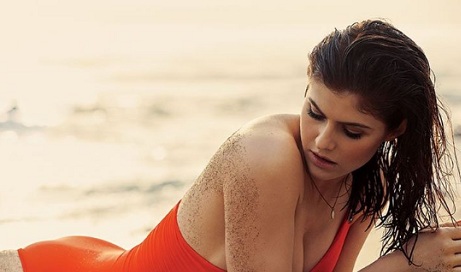 The movie Baywatch released in 2017. It was an American action comedy film. The movie is based on the television series Baywatch. The movie Baywatch was directed by Seth Gordon. Writers duo Mark Swift and Damian Shannon had written the movie. Baywatch stars Dwayne Johnson, Zac Efron, Jon Bass, Alexandra Daddario, Kelly Rohrbach and Priyanka Chopra as leading cast. There are 5 unknown facts of Baywatch movie which are pointed out below. We will also reveal whether Alexandra Daddario gains weight for Baywatch or not.

Baywatch movie was stuck for many years in production hell and earlier it’s supposed to be directed by Sean Andres. For the lead female role as many as 7 actresses were shortlisted for the Baywatch movie. They were Alexandra Daddario, Ashley Benson, Nina Dobrev, Alexandra Shipp, Shelley Hennig, Bianca A.Santos and Denyse Tontz.

It was none other than Dwayne Johnson who confirmed Alexandra Daddario’s presence in the movie. She played the love interest of Efron’s character. Dwayne Johnson also confirmed the actress Kelly Rohrbach for the character of C.J.Parker.

The role of an antagonist in the movie BAYWATCH was played by Bollywood actress Priyanka Chopra. Earlier, the role was supposed to be played by a male character. Apart from these 5 unknown facts of BAYWATCH movie, there were some scenes of Logan Paul (American Youtuber) were cut down. Loan Paul was also supposed to be the supporting cast of this movie.